The United States Navy has grand green ambitions. It aims to replace fossil fuels with renewable biofuels in 50 percent of its missions by 2020. In pursuit of that goal, the Navy is planning what is commonly called a demonstration exercise (some might call it a dry run, but the ocean is really wet, so that would probably sound odd) next summer off of Hawaii. 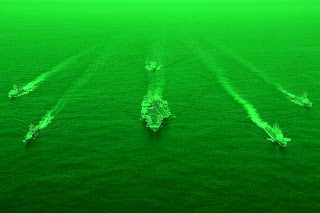 To create a 50-50 mix with fossil fuel for that mission’s planes and ships, the Navy recently placed an order for 450,000 gallons of biofuel with a company called Dynamic Fuels. That company is actually a joint venture between two publicly traded companies – the agribusiness behemoth Tyson Foods and a smaller outfit called Syntroleum Corporation that has specialized in gas to liquids and coal to liquids technologies.

The Dynamic Fuels site says they have a proprietary process in use at a plant, “near Baton Rouge, utilizing its technology to turn animal byproducts such as beef tallow and pork and chicken fat into renewable diesel.” That plant, the site says, may one day be capable of churning out some 75 million gallons of biofuel per year. (Fun fact, the United States uses somewhere in the neighborhood of 140 billion gallons of gasoline per year and about 60 billion gallon of diesel a year.)

So, chicken fat ahoy? No, the Navy order is too big for that. Dynamic Fuels will instead be processing algae-based oil supplied by another company, Solazyme, that the Navy has also bought from – in smaller quantities – in the recent past.

The Navy will pay Dynamic Fuels about $26.60 a gallon for the biodiesel; many times higher than the cost the Navy typically pays for traditional diesel. Some quick math tells us the final order will come to about $12 million. Seems kinda pricey, but according to this story, just last year the Navy paid $242 per gallon for a much smaller biofuel order. So, that’s progress, right?

Yes, yes it is. And progress often comes at a price above the going market rate. So thank goodness the Navy understands the threat that reliance on a finite vital resource represents to its way of life (and/or death) and is willing to pay those higher prices as an investment in companies that demonstrate they might have a promising solution.